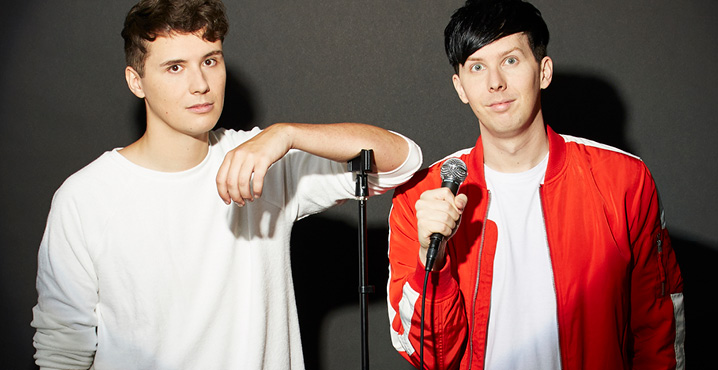 SCHENECTADY—JULY 17, 2018—Daniel Howell and Phil Lester are two of the world’s biggest YouTube stars. From producing their own comedy videos, they have gone on to present a Radio Academy Award winning show for BBC Radio 1; host international coverage of the BRIT Awards; release an app game, The 7 Second Challenge, which reached #1 on the iTunes store; and, in 2017, the hit board game Truth Bombs. They also proudly support charitable organizations such as Young Minds, Stand Up to Cancer and the British Red Cross.

In March 2015, Dan and Phil launched their debut book The Amazing Book Is Not On Fire and accompanying 75-date international trek The Amazing Tour Is Not On Fire. The book went to #1 on The Sunday Times and New York Times bestseller lists and the outing became the biggest world tour ever undertaken by YouTube creators … until now.

At Proctors, Dan and Phil present their new stage show, Interactive Introverts—two internet dwelling, insecure nerds standing under the spotlight to give the people what they want: an epic interactive experience of rants, roasts, battles, stories and surprises that will make you laugh, cry, and cringe. It puts the audience in control unlike anything before!