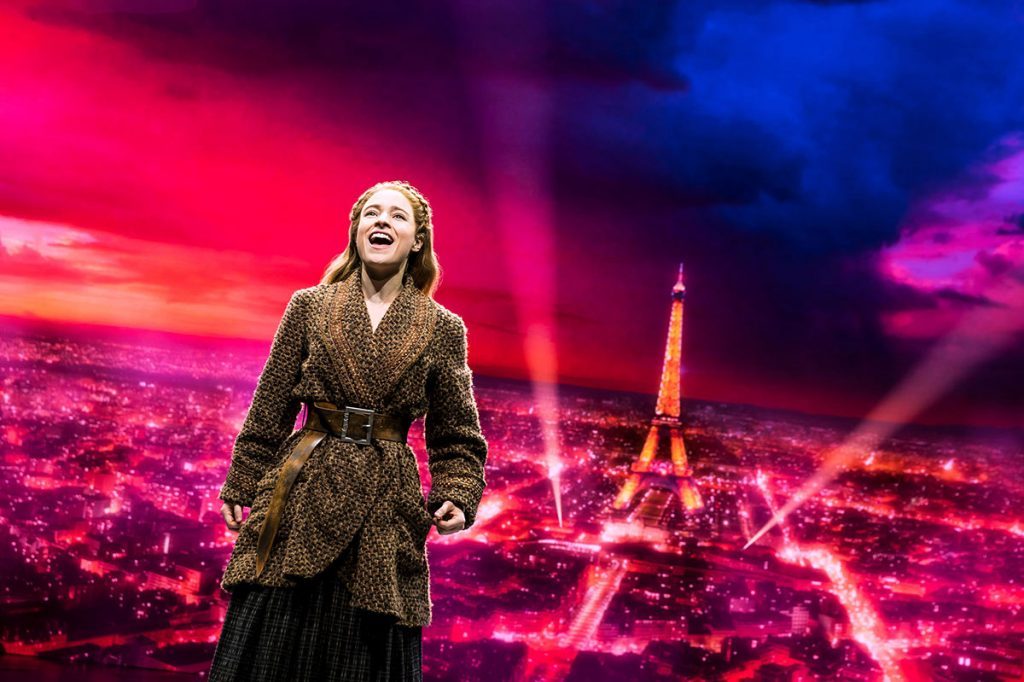 COMPLETE CASTING ANNOUNCED FOR THE
NORTH AMERICAN TOUR OF ANASTASIA

(New York, NY) — Casting has been announced for the North American tour of the critically-acclaimed Broadway production of ANASTASIA. This production features a book by celebrated playwright Terrence McNally, a lush, new score by Stephen Flaherty (music) and Lynn Ahrens (lyrics) and direction by Tony Award-winning director Darko Tresnjak. The tour will launch at Proctors in Schenectady, NY on October 9, 2018 and will go on to play 30 cities in its first season.

From the Tony Award®-winning creators of the Broadway classic Ragtime and inspired by the beloved films, ANASTASIA is the new Broadway musical that’s “one of the most gorgeous shows in years!” (New York Observer). This dazzling show transports us from the twilight of the Russian Empire to the euphoria of Paris in the 1920s, as a brave young woman sets out to discover the mystery of her past. Pursued by a ruthless Soviet officer determined to silence her, Anya enlists the aid of a dashing conman and a lovable ex-aristocrat. Together, they embark on an epic adventure to help her find home, love, and family.

ANASTASIA, currently celebrating an open-ended run on Broadway, began performances on March 23, 2017 at the Broadhurst Theatre (235 West 44th Street) with critics exclaiming “Ahrens and Flaherty have chosen the right moments to musicalize, and their score here sounds complete and full—one of the season’s strongest! (NBC)” and “Smartly adapted by Terrence McNally, Anastasia is a sweeping adventure, romance and historical epic whose fine craftsmanship will satisfy musical-theater fans (Time Out).” The new musical has played to sold out crowds on Broadway since officially opening in April 2017, in addition to garnering multiple Tony, Drama Desk and Outer Critics Circle awards and nominations.

The original Broadway cast recording is available at BroadwayRecords.com, Amazon.com and iTunes. The 75-minute album includes the Academy Award®-nominated favorite “Journey to the Past” alongside new numbers from the show such as Christy Altomare’s haunting “In My Dreams,” Ramin Karimloo’s passionate “Still,” and Derek Klena’s heart-racing “My Petersburg.”

Lila Coogan (Anya) is thrilled to be joining the cast of Anastasia on tour! Previous credits include Broadway: Mary Poppins (Jane Banks). Regional: Hairspray at Syracuse Stage (Penny Lou Pingleton). Television: ABC’s “What Would You Do?” with John Quinones. Lila also had the opportunity to star opposite Donna Murphy in the title role of Pamela in the Broadway Care Actors Equity Fights Aids benefit concert production of Pamela’s First Musical. The show featured a score by David Zippel and Cy Coleman, and a book by Wendy Wasserstein. Lila attended Syracuse University and received her BFA in Musical Theatre.

Stephen Brower (Dmitry) is beyond thrilled to share this show with the country after making his Broadway debut in the New York production earlier this spring. First a vacation cover, he soon thereafter joined the ensemble as a “Dmitry” understudy and was lucky enough to perform the role. This will mark his third national tour since graduating in 2015 from Texas State University. Previously Stephen bounced around the country with Pippin (swing, u/s “Pippin” and “Lewis”), then An American in Paris (ensemble, eventually assuming the role of “Adam Hochberg”). Favorite regional: Ogunquit Playhouse, Connecticut Repertory Theatre, Lyric Theatre of Oklahoma, and The MUNY. Stephen was born and raised in Tulsa, Oklahoma.

Edward Staudenmayer (Vlad) has spent the last few years touring with the Phantom of the Opera as Andre. He recently starred as Emile DeBeque in South Pacific at the Guthrie. Broadway: Wonderland and Martin Short: Fame Becomes Me. Ed spent 24 years with Forbidden Broadway, taking him Off Broadway, around the world and onto three cast recordings. Tours and regional: Anything Goes, A Room With A View, Spamalot, Spamilton, Beauty and the Beast, The Scarlet Pimpernel, Joseph…, Cats, Noises Off. Nominations: Helen Hayes, Barrymore and National Theater Awards. UCLA Graduate.

Brianna Abruzzo (Ensemble). NYC native, Brianna Abruzzo, started her dance training at age 8 at the School of American Ballet in New York City. From there she joined Miami City Ballet, LA Dance Project, West Side Story with Asolo Rep (Graziella) and An American In Paris 1st National Tour. Brianna is thrilled to embark on this journey through her second 1st National Tour.

Mary Illes (Ensemble, u/s Dowager Empress). Most recently played Golde in the National Yiddish Theater production of Fidler afn Dakh, with the New York Times calling her performance, “dignified even when henpecking, and she contributes much to the haunting beauty of the score.” Broadway: The Phantom of the Opera (Mme. Giry und/perf), The Music Man (Marian und/perf), The Scarlet Pimpernel (Marie, Marguerite (und/perf), Steel Pier, She Loves Me. She played the role of Dona Lucia D’Alvadorez in Goodspeed Opera House’s Where’s Charley?, directed by Tony Walton, and at Irish Repertory Theater she was the elegant and secretive Mrs. Erlynne in Noel Coward’s After the Ball. She has appeared in three shows at City Center Encores!: Music in the Air, Lost in the Stars and Finian’s Rainbow. Concert appearances include: Bernstein’s Broadway, soloist with the Vienna Philharmonic and baritone Thomas Hampson at Innsbruck’s Summer Music Festival, Salute to Broadway with the New Haven Symphony with baritone Curt Olds, and conductor Jerry Steichen, and solo appearances with Walt Disney World’s All American College Orchestra. Cabaret: Wanderlust at the Kaplan Penthouse. She played the Gumbie Cat and Griddlebone in Cats Paris in French and Cats Vienna in German. TV: “Orange is the New Black.” Film: “Freeheld.” She teaches voice at the Joffrey Summer Musical Theater workshop, as well as in her private studio.

Kourtney Keitt (Ensemble, Tatiana Romanov, Dunya) is pleased to make her National Tour debut in Anastasia. She is originally from Chester Springs, Pennsylvania and currently resides in New York City. She received her B.A in Dance as well as Psychology from Marymount Manhattan College. In her years post grad, she began her professional career in the commercial scene as a Knicks City Dancer, then performed repertoire with Royal Caribbean Productions for a few years while seeing the world. Her regional career/interest began a few years ago when she performed in Joe Iconis’ Broadway Bounty Hunter (Barrington Stage Company). Additional regional credits include: An American In Paris (Ogunquit Playhouse), Evita (Asolo Repertory Theater), Oklahoma (Arrow Rock Lyceum Theatre), and Hairspray (The Palace Theatre).

Mark MacKillop (Ensemble, Prince Siegfried). Originally from Vancouver, British Columbia, Mark grew up performing in musical theatre starting in elementary school. At age 17, he started studying ballet and after summer training with Boston Ballet and ABT in NYC, he was hired by the nation’s oldest continually running company, the Atlanta Ballet. After dancing 3 seasons with the ballet, Mark moved to New York to pursue musical theater. After performing in On Your Toes as part of New York City Centers Encores series, he spent a year playing Riff on the International tour of West Side Story. Most recently Mark toured the US performing in the National Tour of Dirty Dancing.

Claire Rathbun (Ensemble, Olga Romanov, Odette). Theatre credits include; BROADWAY: Cats (Victoria) OFF-BROADWAY/ LAB: Little Dancer (Chantal, Marie u/s) REGIONAL: On the Town (Ivy) Rathbun has competed and won silver and bronze in worldwide ballet competitions in 2013 and 2014. Rathbun was a member of Washington Ballet in D.C. from 2014-2016, where she performed at the Kennedy Center. Rathbun is on the permanent faculty of Syracuse City Ballet as a principal guest artist, and teacher.

Michael McCorry Rose (Ensemble, Tsar Nicholas II, Count Ipolitov, u/s Gleb) is a Broadway actor most recently seen in the Tony Award winning musical A Gentleman’s Guide To Love and Murder. Prior to that, he starred as “Fiyero” in the smash hit musical, Wicked. He recently appeared in The Williamstown Theatre Festival debut of the new musical Lempicka, directed by Rachel Chavkin. In New York, Michael has appeared in concert at Jazz at Lincoln Center, Avery Fisher Hall, Symphony Space, Birdland and Feinstein’s/54 Below. Along with Karl Scully and David O’Leary, Michael is part of the group TRÍ: The New Irish Tenors. He regularly appears in concert with Academy, Grammy and Tony Award winning composer Stephen Schwartz (Wicked, Godspell, Pippin, Disney’s The Hunchback of Notre Dame), their most recent concert was filmed for PBS’s Great American Songbook Concert Series at NJPAC, aired in the summer of 2016 and was recently nominated for a 2017 Regional Emmy Award. Michael has performed with symphonies and concert orchestras across the United States, most recently starring in a symphonic concert of Chess with the Temecula Valley Symphony in California. Internationally, Michael has performed in concert at the Adelaide Music Festival in Australia, for the U.S. State Department in Nairobi, Kenya and in Sao Paulo, Brazil. His theatrical credits include roles at regional theaters such as The Paper Mill Playhouse, Yale Repertory Theater, Primary Stages, Capital Repertory Theatre and Project Shaw in New York City. Originally from San Diego, he holds a B.A. in Mass Communication Studies from the University of California, Los Angeles, where he appeared in Carol Burnett’s directorial debut of Once Upon A Mattress.
Matt Rosell (Ensemble, u/s Dmitry). Recent Credits; Theatre: Les Misérables (Bway and Natl. Tour), South Pacific (Cable), Joseph…Dreamcoat (Joseph), A Wall Apart (NYMF) music by Air Supply. TV/Film: “Marvelous Mrs. Maisel” and “Glee” (pilot).

Sareen Tchekmedyian (Swing, u/s Odette). A classically trained ballet dancer, Sareen Tchekmedyian previously danced with Sarasota Ballet, where she performed featured roles in ballets by world renowned choreographers. Some of her roles include Caroline in Antony Tudor’s Lilac Garden, The Secretary in Jerome Robbins’ Fancy Free, and soloist roles in Sir Frederick Ashton’s Birthday Offering and Enigma Variations, Christopher Wheeldon’s There Where She Loved, and George Balanchine’s Jewels. Born and raised in Huntington Beach, CA, Sareen began her ballet training at Southland Ballet Academy and continued her pre-professional training when she joined Houston Ballet II in 2009. Sareen has always admired Broadway shows and has dreamed of using her voice on stage one day. Anastasia will mark her debut in musical theatre and she could not be more thrilled.